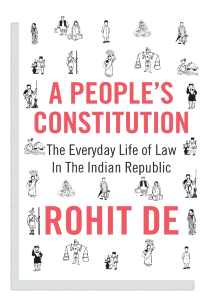 A People’s Constitution: The Everyday Life of Law in the Indian Republic

It has long been contended that the Indian Constitution of 1950, a document in English created by elite consensus, has had little influence on India’s greater population. Drawing upon the previously unexplored records of the Supreme Court of India, A People’s Constitution upends this narrative and shows how the Constitution actually transformed the daily lives of citizens in profound and lasting ways. This remarkable legal process was led by individuals on the margins of society, and Rohit De looks at how drinkers, smugglers, petty vendors, butchers, and prostitutes–all despised minorities–shaped the constitutional culture.

The Constitution came alive in the popular imagination so much that ordinary people attributed meaning to its existence, took recourse to it, and argued with it. Focusing on the use of constitutional remedies by citizens against new state regulations seeking to reshape the society and economy, De illustrates how laws and policies were frequently undone or renegotiated from below using the state’s own procedures. De examines four important cases that set legal precedents: a Parsi journalist’s contestation of new alcohol prohibition laws, Marwari petty traders’ challenge to the system of commodity control, Muslim butchers’ petition against cow protection laws, and sex workers’ battle to protect their right to practice prostitution.

Exploring how the Indian Constitution of 1950 enfranchised the largest population in the world, A People’s Constitution considers the ways that ordinary citizens produced, through litigation, alternative ethical models of citizenship.

There are no reviews yet.

Be the first to review “A People’s Constitution” Cancel reply